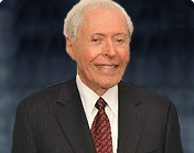 In 1956 and 1957 he was stationed at the Pentagon, Washington, D.C., as a member of the U.S. Navy. From 1958 through 1978, Mr. Lieberman conducted a trial practice, civil and criminal, in Miami, Florida. In 1978, he was appointed as an Administrative Law Judge with the Social Security Administration. In 1980 he returned to the private sector, limiting his practice to the field of social security law.

Mr. Lieberman is a present member of the Council of Past Presidents of the National Organization of Social Security Claimants’ Representatives (NOSSCR), and is a frequent lecturer, locally and nationally, on all aspects of social security law.

Mr. Lieberman has lectured at numerous social security legal seminars, nationwide, including more than 25 occasions for the Florida Bar and the State Bar of Georgia. He has testified before the House Ways and Means Committee Social Security Subcommittee in 1984 and 2000. He also was invited to testify before the Presidential Commission on Pain in 1985.

Mr. Lieberman has been a member of the Editorial Advisory Committee for West/Thompson Social Security Reporting Service since its inception. In 2001, he was the only Social Security practitioner selected by the South Florida Legal Guide as one of the top 250 lawyers in South Florida.